Reality is Flexible, Especially if You Have Koch Brothers Money 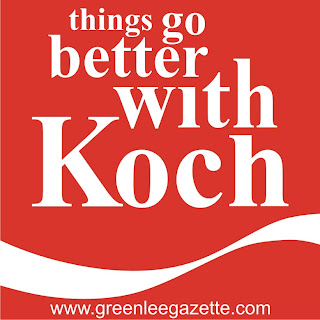 If you've got an unpopular government policy that you really want to have passed, it's always a good idea to have at least a quasi-reasonable sounding argument for it.  And often, they do. Like the Voter ID laws: even though they want to pass them to keep groups of likely Democrats from voting, the argument that it will cut down on voter fraud sounds persuasive (except for the fact that this type of voter fraud is vanishingly obscure). Or state pensions: states can only continue to pay so much. . .do you know how much they're making?!? (forget that these pensions were a form of deferred payment, part of their agreed to employment contracts).

But if a reasonble argument is a little elusive, an alternative is to seed the media with people who agree with you. "Experts" from many and varied organizations singing your song. The Koch Brothers are two of the very richest people in the world. But they want more. So, they've created "The Cato Institute" and "Americans for Prosperity" and countless other organizations with authentic sounding names. You get enough of those groups to get people on cable news, or talk radio, or advertisements saying the same thing over and over again, and it starts to become a conventional point of view, whether it's "popular" at first or not:

I'm not saying that there aren't Democratic think tanks, there are. Right-wing World would claim that George Soros is the equal to both Koch brothers, but that isn't really true. Soros, for example, doesn't push agendas or policies that would tend to enrich himself. The Koch brothers cannot make that claim, not by a long shot.

The Democratic process is being hijacked in lots of subtle ways, much more proveable than those supposedly thwarted by Voter ID laws. There is large-scale stuff like what the Koch Brothers are doing, and then there are more targeted things like companies that pay people to comment on internet forums to advocate their product or view. Or trash a product or view. Companies that have voice actors who (for a price) will call in to, for example, C-SPAN or The Rush Limbaugh Show or NPR or Crazy Ira and the Douche to do the same thing. There is FreeRepublic.com, where members encourage others to "FReep" a poll, meaning to hijack it to sway the results. And then there are anti-FReepers who have learned to do the reverse.

All of this was inspired by the Brave New Films video by Robert Greenwald in the clip, so I'm off on a slight tangent, I know. But it is fascinating what we're becoming as a country. We've long been accused of being shallow people. And a lot of this subterfuge is helped by a populace that isn't very concerned with digging deeper or turning over rocks. But it's getting so insidiously creative that even those of us who fancy ourselves as "plugged in" are probably at least occasionally deceived themselves. I for one have had to "talk down" a few liberal friends who were--clearly unknowingly--parroting something that sounded good, but was FOX "News"-bred claptrap.  It's tricky to know what--or who--is real these days.
Newer Post Older Post Home