Okay, so the best joke is in the title, but it made me laugh, so there you go.

Yeah, I know this was a "test vote" all for shits and giggles and political posturing. But is this really something we should be playing chicken with? Do all parties involved realize that people can see what they're doing? I'm just wondering, because tampering with world markets just to score points seems to be an incredibly foolhardy game.

House Republicans dealt defeat to their own proposal for a $2.4 trillion increase in the nation's debt limit Tuesday, a political gambit designed to reinforce a demand for spending cuts to accompany any increase in government borrowing. . .

Well, well, well. So, Sheriff Joe, big tough guy, FOX "News" favorite? Apparently he can't even police his own men effectively. And if the FOX fans are true to form, there will be no impact on his popularity there. They forgive any ridiculous thing that Sarah Palin or Glenn Beck do, so they'll offer their sympathy, backed with their support, undoubtedly. What, me cynical?

Arizona Sheriff Joe Arpaio has made a name for himself as “America’s toughest Sheriff.” For the past several years, Arpaio has waged a crusade against Maricopa County’s undocumented population through immigration sweeps and dehumanizing tactics. . .

Thanks to Stupid Monkey Planet for the link.

This one is for my good friend, Stupid Monkey Planet. I spied this brand of wine at our local apothecary (Lee's Discount Liquor), and was instantly reminded of him. It carries the infamous three monkeys: see no evil, hear no evil, speak no evil, and the brand name, Pinot Evil. I'm a big fan of red wine, and of monkey, so I may give it a try. 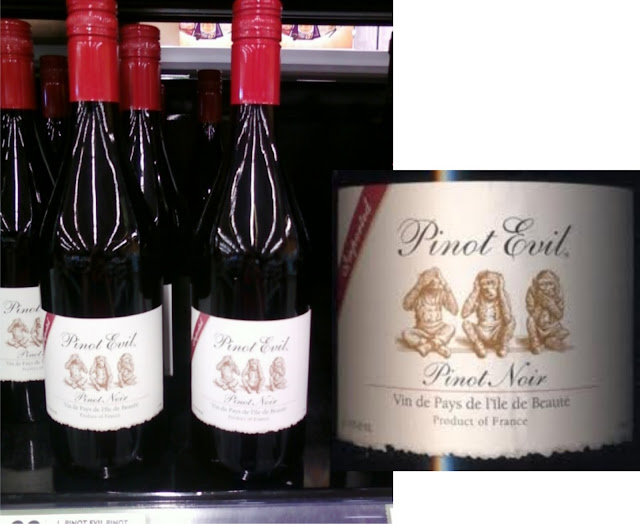 What Happens in Vegas: Mayor Goodman Prepares to Say Goodbye

I've lived in Las Vegas for over 16 years, but I don't really live in Las Vegas. I live in Paradise Township, which is where you've actually been when you've visited the Las Vegas Strip. You have to get north of the (now defunct) Sahara to enter Las Vegas proper, and a lot of people never even get there.  The mayor of what is north of the strip is Oscar Goodman, you may have heard of him.
Oscar usually does little to dissuade people from thinking he's the mayor of the whole Las Vegas valley, and I don't blame him, really. And when you think about it, since most people don't know there's a difference, Goodman sort of does represent all of us here. And he's been an effective presence, certainly the most visible mayor in the country (unless one is currently in a sex scandal or something). We'll miss him. Of course, if his wife wins the upcoming election, we won't have to look very hard for him.
[Excerpt]
Las Vegas Mayor Goodman Reluctantly Says Goodbye
Las Vegas Mayor Oscar Goodman surveyed the piles of memorabilia spilling from his City Hall office: the bowling ball disguised as an olive, the diamond-studded bottle of gin, the Red Bull mini-refrigerator. It all must go, but he can't bring himself to start packing. . .

Thanks to Stupid Monkey Planet for the link.

For no other reason other than it occured to me, and I found it. Funniest seven minutes ever.

What is "The Lost 80s?" It is music from the 1980s that you don't often hear, even on "I love the 80s" or your local "80s and More!" radio stations. These are the songs that were small to medium hits on MTV and your local radio stations. But they fell through the cracks somehow. They could be one-hit wonders. Or, they're the second or third hit from a flash in the pan. They could be the third tier hits from groups or acts that had a dozen hit songs. Somehow, people just forgot about them. But not me. . .

#1 - One in a Million, The Romantics - The group better known for their huge hit, Talking in Your Sleep, also had a fairly big hit with this forgotten tune.
#2 - The Sun Always Shines on TV, ah-ha - Sure, you remember Take on Me, but do you remember this one?
#3 - Living in a Dream, Pseudo Echo - This group barely made a ripple in the United States, but you might remember their remake of Lipps, Inc.'s Funkytown. This song was their first hit though, and nobody plays it today.
#4 - Room to Move, Animotion - Everybody knows Obsession. It was an 80s anthem. But this one gets no respect.
#5 - Hyperactive!, Thomas Dolby - Though accomplished in music, Thomas Dolby will always be remembered for She Blinded Me with Science. But Hyperactive! was a big hit back in the day. And do you remember the even rarer Airhead?
#6 - Baby Love, Regina - Who was Regina? Who knows? Everybody in the 80s just thought this was one of Madonna's new hits. It wasn't.

I labeled this Blast from the Past installment as Part 1 for a reason. There are a lot of these things. I may not run sequels in sequential weeks, but trust me there is more to come. Meanwhile, if you have the day off on Memorial Day, have a great extended weekend. If not, happy Monday!

Remember when advertising got all meta, and an ad for designer jeans might just feature naked people, with maybe a pair of jeans draped over a chair or something? You'd look at it and say, "Um. . .whut?" They started doing that in the mid 80s, and it comes around over and over. It's amazing how often I see a memorable commercial, and I can't remember the product.

Well, Sarah Palin has a spot out right now, and it has the opposite problem. I know the product: Caribou Barbie, the former half-term Governor of Alaska, you betcha. But damned if I know what the ad is for. Is she running for president? Does she have a book to sell? Is she selling flags or copies of the pledge of allegiance? She's sure to get "God" in there prominently, that part I didn't miss. But mostly what I got is a bunch if vague patriotic claptrap in Palin's insufferable screeching voice. The woman simply has one of the worst voices of all political celebrities, elected, televised or broadcast. She seriously needs to get Hillary Clinton's voice coach on the line, whatever the hell she's trying to sell us now.

UPDATED TO ADD: I'd love to hear from a Palin enthusiast exactly what a Palin candidacy would entail. This is a woman who very clearly did not know much at all beyond her own Alaskan issues--if that--prior to 2008. She is also a  woman of thin skin, with an easily stoked counter punch, and a fragile ego. She's quick to feign and dodge, instead of being forthright. She's a product more than a person. WTF do you people see in this political confection?

Again, catching up on a few odds and ends I forgot to post. This is last week's OverTime, the extended internet-only portion of Real Time with Bill Maher. I usually post this on the Saturday after a live show, but I missed it. But since Real Time wasn't on this week, maybe it's good that I saved it. Enjoy.